This page has been archived on the Web

Information identified as archived is provided for reference, research or recordkeeping purposes. It is not subject to the Government of Canada Web Standards and has not been altered or updated since it was archived. Please contact us to request a format other than those available.

This page has been archived on the Web.

Future emissions of greenhouse gases and aerosols into the atmosphere depend very much on factors such as population and economic growth and energy use (Barrow et al., 2004).

For its Third Assessment Report (TAR) (IPCC, 2001a), the IPCC commissioned a Special Report on Emissions Scenarios (SRES; Nakicenovic et al., 2000), which developed about forty different emissions scenarios that could be classified into four families, depending on whether or not the scenarios had a global or regional development focus or were driven by environmental rather than economic considerations.

Of these forty emissions scenarios, six have been chosen as illustrative, or marker, scenarios:

A summary of the six main SRES Scenarios:

A1FI — a future world of very rapid economic growth and intensive use of fossil fuels.

A1B — a future world of very rapid economic growth, and a mix of technological developments and fossil fuel use.

A2 — a future world of moderate economic growth, more heterogeneously distributed and with a higher population growth rate than in A1.

B1 — a convergent world with rapid change in economic structures, dematerialisation, introduction of clean technologies, and the lowest rate of population growth.

B2 — a world in which the emphasis is on local solutions to economic, social and environmental sustainability, intermediate levels of economic development and a lower population growth rate than A2.

Which SRES scenario to select

The A1 storyline and scenario family describes a future world of very rapid economic growth, low population growth, and the rapid introduction of new and more efficient technologies. Major underlying themes are convergence among regions, capacity building and increased cultural and social interactions, with a substantial reduction in regional differences in per capita income. The A1 scenario family develops into groups that describe alternative directions of technological change in the energy system.

The A2 storyline and scenario family describes a very heterogeneous world. The underlying theme is self-reliance and preservation of local identities. Fertility patterns across regions converge very slowly, which results in high population growth. Economic development is primarily regionally oriented and per capita economic growth and technological change are more fragmented and slower than in other storylines.

The B1 storyline and scenario family describes a convergent world with the same low population growth as in the A1 storyline, but with rapid changes in economic structures toward a service and information economy, with reductions in material intensity, and the introduction of clean and resource-efficient technologies. The emphasis is on global solutions to economic, social, and environmental sustainability, including improved equity, but without additional climate initiatives.

The B2 storyline and scenario family describes a world in which the emphasis is on local solutions to economic, social, and environmental sustainability. It is a world with moderate population growth, intermediate levels of economic development, and less rapid and more diverse technological change than in the B1 and A1 storylines. While the scenario is also oriented toward environmental protection and social equity, it focuses on local and regional levels. 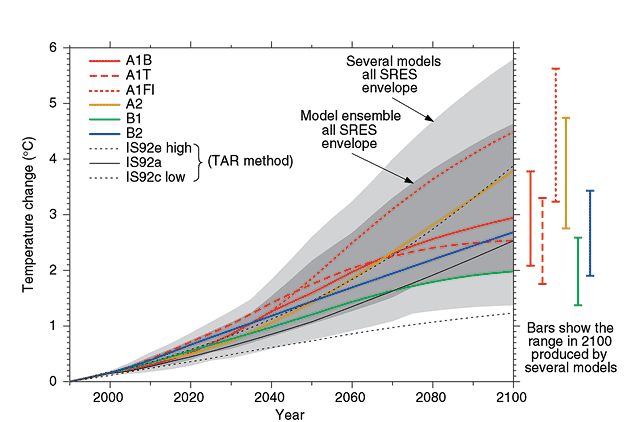 Global mean temperature projections for the six illustrative SRES scenarios using a simple climate model tuned to a number of complex models with a range of climate sensitivities. Also for comparison, following the same method, results are shown for IS92a. The darker shading represents the envelope of the full set of thirty-five SRES scenarios using the average of the model results (mean climate sensitivity is 2.8 °C). The lighter shading is the envelope based on all seven model projections (with climate sensitivity in the range 1.7 to 4.2 °C). The bars show, for each of the six illustrative SRES scenarios, the range of simple model results in 2100 for the seven AOGCM model tunings.

Report a problem on this page